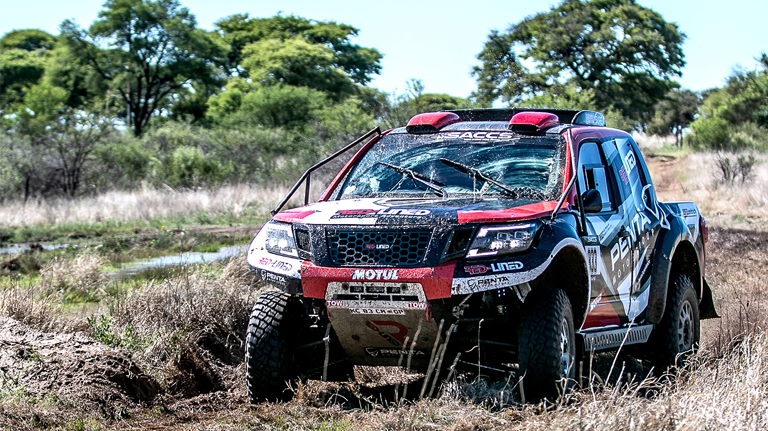 Red-Lined Motorsport, racing with the Penta Motor Group enjoyed a tough but yet rewarding weekend at the penultimate round of the 2021 South African Cross County championship at a super rough and tough Vryburg 400. The team was doubly delighted — by both the performance of its all-new Red-Lined REVO in the capable hands of Eben Basson and Gerhard Schutte, and then by yet another best result for Philip Botha and Roelof Janse van Vuren, who also continued their incredible 100% finishing record.

“That was an extremely tough one, not only for the rough and varied terrain but also for the four seasons we experienced over the two days, but both our race cars made it home in the end!” Red-Lined team principal Terence Marsh pointed out. “We were impressed by Eben and Gerhard’s pace in our all-new Red-Lined REVO, even though they suffered a little misfortune later in the race. “And we are immensely proud of Philip and Roelof, who finished their 14th consecutive cross-country race since their debut and this together with their first ever top-ten result in what was a star-studded FIA class field.”

Relative rookie Basson and Schutte were trading places with SA’s top cross-country crews within the top 10 onboard the Dragon Energy branded REVO prototype throughout the first loop. But unfortunately, the rough conditions got the better of them early on the second loop resulting in a torn CV boot which led to an outer CV joint failure and loss of rear wheel drive. No trouble for the intrepid crew however – they engaged diff lock and drove the remaining 120 km home in front wheel drive – an amazing achievement all on its own!

“Most importantly, we have seen the Red-Lined future and it’s very bright!” Eben Basson explained. “The handling of this Red-Lined REVO was magnificent while it was on song. “We easily kept pace within the top 10 and I enjoyed an incredible morning at the wheel. “The way this car handles, soaks up the toughest terrain and is able to get traction is simply sensational. “It’s a pity we hit trouble, but even to be able to bring it home eighth with front drive only is an encouraging and positive sign. “What a race car!”

“We could never have achieved what we have without a brilliant team behind us so first and foremost, let’s toast Terence and the lads. “Not just for the strong and reliable machine they have produced in the VK56, but also for their part in giving us an incredibly well-prepared race car that has brought us home in every race since we first stepped into a cross country racer in anger. “We will forever be thankful for this world class service!”

Terence Marsh was quick to emphasise his crew’s astounding finishing record: “Philip and Roelof had never sat in a racing car before they drove one of our Red-Lined cars for the first time. “Now a little more than a year later, they have not just successfully finished every one of the fourteen races they have started, which include 22 full racing stages through some marathon events but they have now covered a total of 8,900km of cross-country racing since they started. “It is honestly quite incredible and it makes us proud to have them do it on one of our race cars!”

Red-Lined Motorsport wraps its South African Cross Country campaign up at the Parys 400 along the banks of the Vaal River in the Northern Free State on 20 November.