Penta Suzuki Rustenburg, the 2020 Dealer of the Year 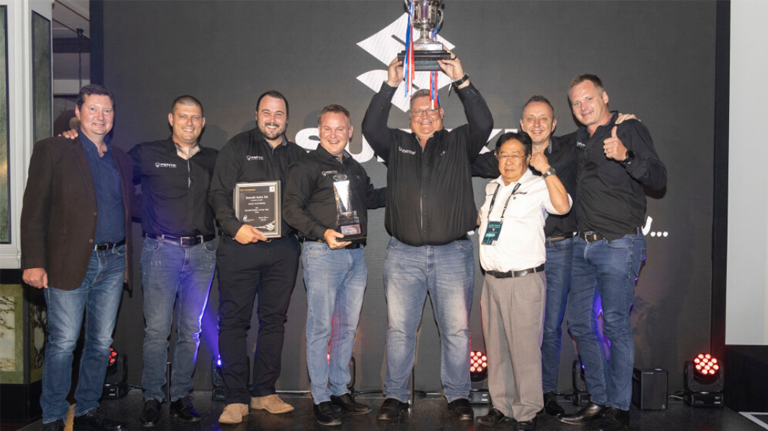 What a year to be a Suzuki dealer.

And what a year to be a customer of one of Suzuki’s growing network of dealers, who not only outperformed every metric for quality of sales and service support but also made Suzuki the third most popular vehicle brand in September.

Suzuki Auto South Africa celebrated its incredible performance in the past year at its national dealer conference, which ended with a special event to recognise its top-performing dealers.

Awards were handed to the best-performing dealers in various categories, including sales, after-sales, Mobility Finance and parts supply, culminating in the Dealer of the Year 2020 Award. This special award was handed to Penta Suzuki Rustenburg.

“Last year, Penta Suzuki Rustenburg best personified the spirit that all our dealers have shown. Our dealers have helped Suzuki grow its annual sales by 9% in fiscal year 2020, while the market contracted by a massive 26%,” says Yukio Sato, the Managing Director of Suzuki Auto South Africa.

“While much can be said about our range of reliable and affordable Suzuki cars, SUVs and commercial vehicles, we cannot discount the hard work that our dealer network has invested in making this brand a success,” says Sato san.

“Each of our 75 dealers went well beyond the call of duty to serve customers during the various lockdown levels and to help the many future Suzuki customers who are on the waiting list for their Jimny, Swift or other model.”

Suzuki Centurion is the 2019 Dealer of the Year, and last night it also won awards for best customer satisfaction and top large dealer. It was also counted among 11 dealers who received an Elite Dealer Award.

A few years ago, Suzuki started awarding dealers who had a very high average score across all categories, including parts availability, sales and service support, Mobility Finance support and overall customer service. These dealers all received Platinum Awards.

For the 2020 fiscal year, no fewer than 13 dealers received Platinum Awards.

Soon after introducing the Platinum Award, the average performance of a Suzuki dealer was such that Suzuki introduced an ever-higher award – the Elite Dealer Award – which this year had 11 recipients.

“It is incredible to consider that a third of all of our dealers received Platinum or Elite Dealer Awards and that the average service level of a Suzuki dealer in South Africa is now higher than that of the winning dealer in our first year in South Africa just over a decade ago,” says Sato san.

While the overall crown went to Penta Suzuki Rustenburg, Suzuki also picked its top dealer in each of their operating categories.

Suzuki Queenstown was again picked as the Top Rural Dealer, and Penta Suzuki Klerksdorp was the best Small Dealer. Suzuki Helderberg was the Top Medium Dealer and Suzuki Centurion received the award as Top Large Dealer.

Other significant awards handed out during the night, include the Dealer to Watch – Suzuki Cape Town, the Most Improved Dealer – Suzuki Upington, and the Dealer Group with the Most Sales – Penta Motor Group. Penta Suzuki Menlyn was recognised as the Top Selling individual dealer, and Suzuki Piet Retief again had the best market share in its area.

Suzuki Auto also recognised individuals for their contribution to their dealers and the brand’s success. Owen Adams from Suzuki Helderberg is the Technician of the Year, Rico Raath of Suzuki Centurion was the Service Manager of the Year, Odette Allers of Suzuki Queenstown, the Best Parts Manager for a second year in a row, and Daryl Naidoo of Suzuki Zululand was the best Sales Manager.

“We themed this year’s Dealer Conference ‘Let’s Go Again’ in recognition of the incredible work that our dealers have done in the past year and as encouragement to them to keep up the sales momentum. With more new models in the pipeline and widespread recognition of our safety and quality credentials, I do not doubt that our dealers will welcome even more customers to the Suzuki family in the new year,” says Sato san.

Could the Karoo Dusk be Mahindra’s best Pik Up yet?

Red-Lined set for another desert attack