Suzuki Jimny tackles the Richtersveld and beyond 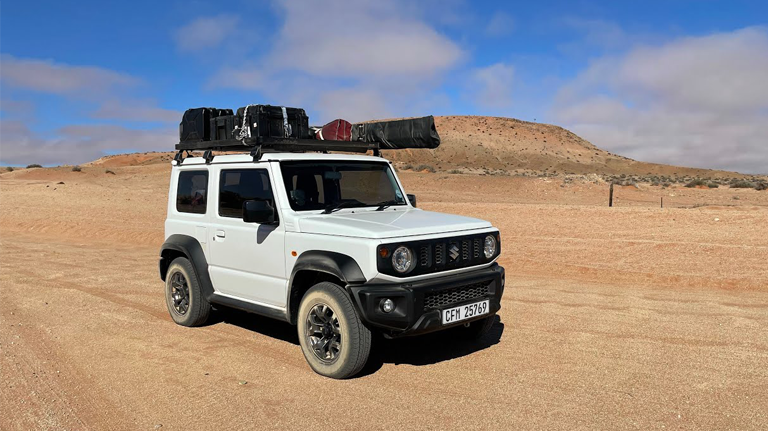 What punches well above its weight, climbs slippery rock faces with ease and floats effortlessly across beach sand and dunes like Mohammed Ali in the boxing ring?

Without a doubt, it is the Suzuki Jimny, which has crept into the hearts of South Africans since the second generation SJ series in the 1980s. When the third generation JB43 arrived people really started to take notice which then grew to a crescendo in 2018 with the latest version to land on our shores that had a waiting list of 1 – 3 years.

To date that model has sold more than 4 700 units and continues to move off the showroom floors before the wheels have stopped turning. The salesperson can tell you what it’s about, partly because it has no direct competitors and partly because it’s just so damn cool.

At the beginning of the second quarter production for the Jimnys headed for South Africa (as well as the rest of Africa, Latin America and the Caribbean) were assembled in India with 100% of the components imported from Japan.

So what’s the plan when you have a market-leading 4×4 and want to showcase its ability?

You put together a Suzuki Safari into some of the most remote areas of South Africa that includes the Richtersveld, Boesmanland, Namaqwaland and the Diamond Route in the previous “Spergebied”.

Which is what we did as we landed in Upington, climbed behind the wheel of a five-speed GLX manual and hit the road to Pofadder.

It was my first time in a Jimny and while initially I was somewhat sceptical about the space for my tall frame, I was pleasantly surprised and even moved the driver’s seat a few notches forward to get comfortable.

My partner and I had driven the same road to Pofadder and beyond in December in a Ford Ranger Raptor so comparisons were inevitable as we set the cruise control to the national speed limit.

The Jimny is not a Raptor, so it was a bit unfair and while the Raptor is a hulk with a wide range of electronic aides and almost three times the price, the Jimny is a little mountain goat that will willingly go anywhere you ask it to.

As someone who has done a fair share of off-road driving and overlanding, and like the original Jimny, I’m not exactly a youngster. You get to live with compromises so we were looking forward to see whether we could live with the Jimny as an everyday vehicle and also use it for faraway trips into the boendoe.

Because it’s boendoe that was waiting for us as Safari leader and co-ordinator JJ du Toit from African Expeditions explained what the rest of the day entailed.

We were to get our day’s activities only in the morning which added to the fun with every day bringing out new and exciting places to see and roads to drive.

First we would be heading to Pella to see the Catholic Church built from a picture in a book without any plans by priests with little or no building knowledge, talk about commitment! It’s the only Afrikaans Catholic church in the country with a fascinating history that includes a Jesus statue on the cross carved with only a pocket knife.

From there we adjusted tyre pressures and headed to Charles Pass which is the start of the Namakwa 4×4 Eco trail. It’s a slightly technical pass that requires careful driving to avoid sharp rocks and jagged edges that will cut a tyre sidewall with no effort.

Being small and manoeuvrable the Jimny started showing its off-road prowess especially when we tackled Bobbejaanspieël (Babboonsmirror) Pass. It’s a steep rocky road with large ruts, rocks and shale that would occasionally engage the electronic rear diff lock as it bumped and bounced its way to the top without getting stuck once.

Part of the Jimny’s off-road ability is the fact that it is only one of a handful of 4×4s that still have a solid (live) front axle that makes climbing difficult obstacles easier than an independent front suspension because the solid axle lifts the car rather than the suspension which “folds” up while the vehicle moves down.

With downhill assist engaged we headed down and along the Orange River to our overnight glamping spot set out up at a gorge on the Karsten Boerdery farm which is also the largest date farm in the southern hemisphere.

It’s when you sit next to a camp fire, ice in your drink with a glorious star covered ceiling above that you understand why you want, or in my case need, a vehicle like the Jimny that can get you to difficult to reach places far from the madding crowd.

Day two we heard an interesting presentation by the farm’s foreman on the history of the farm and the date industry which gave an insight into the intensive but rewarding farming that goes into dates before they get exported. The farm is at the forefront of technology and a small wonder with thousands of trees all immaculately set out this is farming on a grand scale with each tree requiring 700 litres of water a day, that gets pumped out of the Orange River.

Driving along the Orange River that’s so much the lifeblood of the area and back up to the N14 but not before stopping to take pictures of a Quiver Tree Forest which started growing many decades ago after floodwaters that had brought the seeds with it had settled down.

It helps too that “JJ” has an intimate knowledge of the area as well as its fauna and flora and enthusiastically explains the history, background and of course, any journalist’s main question; why?

Through Springbok and over the Spektakel pass, so called because apparently in the late 17th Century Simon van der Stel, while looking for areas to prospect, got to the top of the mountain with his entourage, looked down at the famous flowers in full bloom and described it as spectacular.

Arriving wary and well travelled at Die Houthoop Guest Farm just outside Kleinzee, a spectacular meal prepared by Chef Jackie was just what we needed.

A hearty breakfast and we were off to enter the “Spergebied” previously owned by De Beers Consolidated Mines before they decided they had destroyed the area enough and their return on the diamonds wasn’t sufficient, so they left.

Subsequently, the government became involved with concessions and as you can imagine some dodgy deals went down and unfortunately eco tourism and mining don’t have the same end game. Still, people like JJ and other interested parties in the area soldier on to find a happy medium between the two.

Anyway, we were there to see how the early pioneers like Jan Kotze and the Agenbach family tamed the area which is probably one of the harshest and most desolate parts of the country especially in the early days with tales of trials, tribulations and tragedy.

Driving on soft sand is certainly the Jimny’s forte with the wheels down to 0.8 bar and lightweight build and design it floats across where bigger more powerful vehicles would struggle, without a care in the world.

We easily accessed the wreck of the Piratiny which ran aground in 1943 (local legend has it that it was struck by a German torpedo) filled with general cargo including materials and silks. A few weeks later at “Nagmaal” strangely enough many of the congregation had similar colour clothing.

On to the Border which lost her rudder on April 1, 1947. I imagine some sailors may have thought it a ruse when the captain ordered them to abandon ship but she was carrying explosives, petrol and general cargo for the Namaqualand copper mines so they would have used the safety line very quickly.

Hoothoop have a Kalahari-type sand dune on the farm that made an ideal play pen for the Jimny that saw us drive through, over and around it with much gusto before a unique presentation by the Suzuki team with participants listening to it over the radios and flashing our lights if there were any questions.

We were told about them now being assembled in India, that the recent shortages aren’t being helped by the semi-conductor issues and shipping container shortages, that Suzuki has a 51% market share in India, they sell over 1.6 million vehicles annually, they have an annual production capacity of 2.25 million units and India has the biggest R&D centre outside of Japan.

More significantly for us locals though, is that Suzuki will bring a GL MT and GL AT as well as a Rhino Edition to market in the first quarter of next year that sits between the GA and the GLX.

Sundowners on the edge of the dune followed by a magnificent seafood platter inside the confines of the wooden houthoop with Kabeljou, Steenbras, oysters, crab meat and home-made bread prepared by Chef Jackie ended a perfect safari day.

Heading back to Upington via more dirt roads originally built for the copper mining industry that included the beautiful Wildeperdehoek Pass the Jimny revelled in the conditions.

We were to have one final twist before couples headed off in different directions when we stopped to say goodbye and found three two-week-old kittens abandoned by some low-life next to the road. We gave them some water and when we stopped in Springbok to refuel, bought ideal milk, mixed it with water and fed them with the medic’s syringe.

Suzuki, Safari and JJ are now doing well at the Namakwa Animal Welfare in Springbok.

On the long N14 stretch back to Upington with the 1.5-litre engine using all of its 75kW and 130Nm especially with a cross-wind like only the Namakwaland can produce, we pondered what it would be like to own one.

The Suzuki Jimny creeps into your blood like a rescue dog and before you know it you want one and understand its almost cult status.

Like I said previously, there are compromises when it comes to space and power but that’s easily negated by the smile factor. You’ll change your driving habits accordingly especially with consumption figures of 8.6L/100km after 1 228km that included low range crawling, rocks, dirt roads in 4H, soft sand and tar; everything you’ll encounter on safari in South Africa.

So, absobloodylutely, I’d be able to live with it.

Mahindra XUV700 confirmed for South Africa! Here’s what we know so far