Suzuki impresses on first day of the 2022 Simola Hillclimb 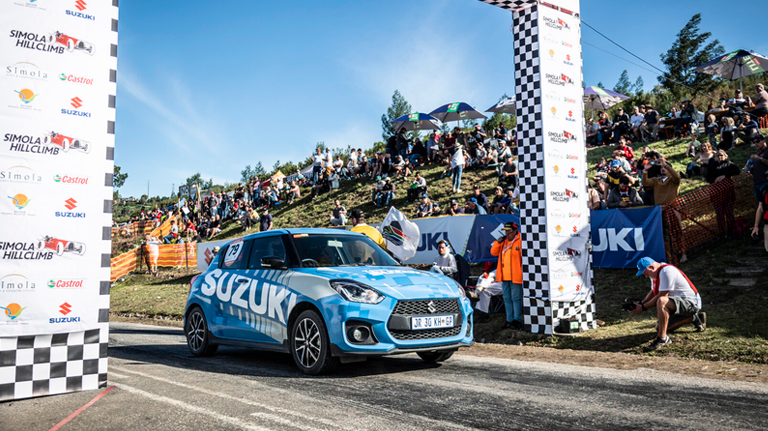 Suzuki Auto has proven that you do not need a big budget to have great fun and be competitive at the Simola Hillclimb.

The two Suzuki Swift Sport models competing in Class A1 for unmodified turbo- and supercharged sports cars ended their first day on the hill with solid qualifying times and a strong position for tomorrow’s last runs and the final class shootout.

“This is our first year as a competitor at the Simola Hillclimb and it has been a thrilling experience,” says Brendon Carpenter, Brand Marketing Manager at Suzuki Auto South Africa.

“It is great fun to see our two drivers and their Swift Sport models improve their times on every run and beat a couple of more powerful machines. At the same time, we could show the spectators that you do not need a seven-figure budget and a large technical crew to be able to tame the Simola Hill.”

Suzuki entered two standard production Swift Sport models in the 2022 Simola Hillclimb. The first – competitor #77 – is a six-speed manual version with precision driver and instructor Wesley Greybe behind the wheel.

Greybe started well despite the very wet conditions in the morning and the additional burden of being the first competitor on the road. He set a time of 1:01.811 in the first practice run.

By the third run, he had dipped below 1 minute on the twisty mountain road with a time of 59.925 seconds. He ended his campaign on the first day with a best time of 55.079 seconds, ahead of several German supercars.

“My previous experience on the hill certainly helped me to put in good times from the start. The Swift Sport surprised me with its plucky nature and lack of turbo lag, which allowed me to shift less and keep my foot planted firmly through the sweeps,” says Greybe.

Greybe previously piloted much larger supercars up the hill as one of the official display drivers, and he set very similar times with these, more powerful but much heavier cars.

“The low weight of the Swift Sport is a real boon. You can be a lot more aggressive with the steering wheel, and the car will remain neutral and planted,” says Greybe.

The second Swift Sport (#79) had motoring journalist and competitive amputee cyclist Reuben van Niekerk as pilot. Reuben set a time of 1:06.135 during his first practice run, before settling into his rhythm and catching up with Greybe.

Van Niekerk finished the practice runs with a best time of 1:01.391 before shaving off nearly six seconds to end at 55.901 seconds during the second qualifying run, a mere 0.822 of a second behind Greybe in the manual Swift Sport.

“I really enjoyed my time on the hill today. The auto box is so good at keeping the engine in its power band that I could focus on my driving technique,” says Van Niekerk.

“Ultimately, the trick to beating the hill is to maintain momentum and that is something we will focus on during tomorrow’s qualifying rounds.”

While the two Swift Sport models with their classic Suzuki Motorsport decals, several other Suzuki-powered machines were also competing against the clock and the hill’s sharp turns.

Megan Verlaque, a well-known rally and rallycross driver and navigator, returned to Simola for her second year in a Speedcar XTREME. It is fitted with a Suzuki GSX-R600 engine, and this year it was dressed in the livery of the Penta Motor Group, a well-known Suzuki dealer group.

Verlaque competes in class C2 for open-wheel racing cars, and she set a best qualifying time of 48.420 seconds.

Devin Robertson is a regular racer at Simola with his sleek Hayabusa-powered Radical SR1. He opted to stay off the wet track during practice and only lined-up for one qualifying round.

The SR1 is a custom-built single seater racing car. This model has a Suzuki Hayabusa engine, which was chosen for its immediate power delivery and tractable nature.

The last two Suzuki models on the track today had two wheels, not four. Suzuki Auto South Africa chose the 2022 Simola Hill Climb to showcase the new GSX-S1000 GT. This new Sports Tourer will land on showroom floors towards the middle of 2022.

Suzuki also invited one of its Superbike racers – AJ Venter – to wow the crowds on his full race-spec GSX-R1000 R. Venter has the unique distinction of running up most of the Simola Hill on his back wheel only.

Racing restarts tomorrow at 9 and will be broadcast on YouTube and the SABC.

Podium and pride for Suzuki at Simola