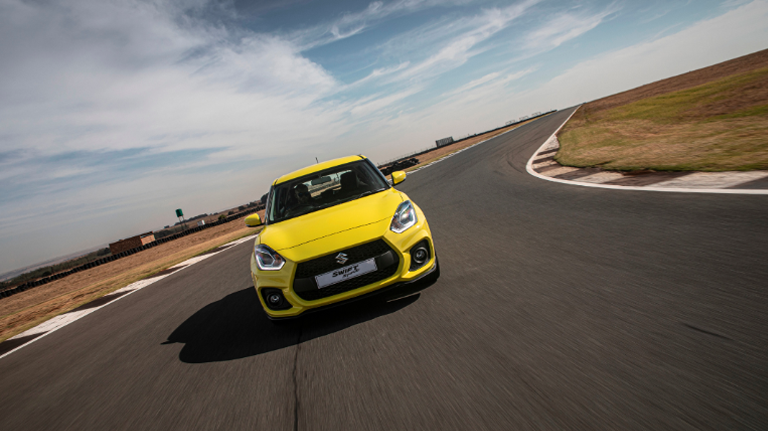 Why did the Suzuki race up the hill? Because it was there!

Suzuki has entered the two Swift Sport models – an auto and a manual version – in Class A1 for road-going turbo- or supercharged sports cars. The vehicles will be piloted by journalist Reuben van Niekerk and precision driver and instructor, Wesley Greybe.

“Last year, we entered the Simola Hill climb for the first time and supported the fleet of Suzuki-powered race cars in the Classic Car Friday and King of the Hill shootout. This year, we up our support as a Tier One sponsor and enter our own Swift Sport to show that you can have double the fun for half the price in the class for standard race cars,” says Brendon Carpenter, Brand Marketing Manager for Suzuki Auto South Africa.

Suzuki is no stranger to hill climbs. Monster Tajima is a legend in racing circles for his record-breaking races up Pikes Peak with modified race cars such as the Escudo (Vitara) Pikes Peak and the SX4 Pikes Peak Special. To this day, the Suzuki Hill climb race cars are some of the most popular vehicles in the Gran Turismo racing game.

“The Simola Hill climb is undoubtedly one of the most prestigious racing events on the South African calendar and it has always been a bucket list item for us.

“We are very proud of the private hill-climb teams that are powered by Suzuki engines, and we believe our involvement is a great fit for the Suzuki brand, as a platform to showcase the spirit, passion and performance of Suzuki as a lifestyle brand,” says Carpenter.

Reuben and Wez behind the wheel

Racing for Suzuki in a 2022 Suzuki Swift Sport Auto is Reuben van Niekerk, a professional motoring journalist with over 18 years’ experience. He is the editor of Automobil magazine.

Van Niekerk is an avid motorsport fan and has competed in several formulas on two and four wheels, including the Krugersdorp Hillclimb. He is also a regular reporter on motorsport events for various publications and is an avid classic car fan.

Van Niekerk is no stranger to competitive sports and spends his spare time on his mountain bike. In 2014, he was the first amputee to finish the gruelling Absa Cape Epic, which is regarded as the toughest mountain bike stage race in the world.

He went on to finish this event a total of five times and in the process became the first person with any disability to join the Amabubesi club for three times finishers.

“I am really looking forward to tackling the Simola Hill climb in Suzuki’s Swift Sport. I feel that the combination of front wheel drive, low weight and a turbocharged engine will work extremely well at this event, and it is the perfect opportunity to showcase what this hot hatch can really do,” says Van Niekerk.

“Just like a time trial cycling event, the Simola Hill climb puts driver and vehicle against the clock with nowhere to hide and is an event that requires the best from both man and machine in order to succeed.”

Van Niekerk’s biggest competition in Class A1 will come from Wesley Greybe in the matching Suzuki Swift Sport manual.

Greybe, affectionately known as Wez, has always had his eye set on a professional racing career and has competed in motorcycle and go-kart racing. He still races in the F400 and SSS karting series and works closely with several racing teams on their race cars.

In his career as Advanced Driver trainer, Wez has worked throughout Africa and the world. One of the highlights of this part of his motoring career has been working as a precision driver for James May, Jeremy Clarkson and Richard Hammond in the first season of The Grand Tour.

Greybe is no stranger to Simola as he was the de facto demonstration driver at previous events. Here he took celebrities, such as a couple of Springbok rugby players up the hill between race heats.

“It was a great jol to go up the hill with passengers and to hear them scream! Now I will have an opportunity to make the crowds scream as we show them how quick the Swift Sport is on the tight and twisty Simola Hill,” says Greybe.

As a Tier One sponsor, Suzuki will host the burnout zone, where competitors create large clouds of white smoke as they warm up their tyres and entertain the crowd, before launching up the hill.

It is worth noting that Simola will reopen its gates for spectators this year, thanks in no small part to the financial support of sponsors like Suzuki Auto.

Among the many competitors that will entertain the crowds are several Suzuki-powered competitors. They include Megan Verlaque and Ashley Haigh-Smith who will race up the hill in two similar Speedcar tubular-framed racing cars. Both are powered by 600cc Suzuki motorcycle engines.

Devon Robertson will also return to compete for the King of the Hill trophy with his Suzuki Hayabusa-powered Radical SR1.

Last year, Robertson stunned the other competitors by finishing in the Top 10 against a number of much more powerful racing cars. He set a final time of 41.075 seconds – the fifth fastest overall – up the hill.

“For Suzuki, our participation in the 2022 Simola Hill climb is very symbolic as it resonates with our ethos of bringing motoring passion to the masses. Whether this is through our cars, such as the true-blue Jimny 4×4 or the thrilling Swift Sport for less than R400 000, or by sponsoring the Simola Hill climb to help the organisers welcome spectators back to the event for the first time since 2019.”

Suzuki and motorsport fans can follow the action on Suzuki’s social media channels and on YouTube, where the organisers will broadcast a live feed of the event.

Suzuki impresses on first day of the 2022 Simola Hillclimb